Beer, Pizza and a Movie in The Gardens: Wayne’s World 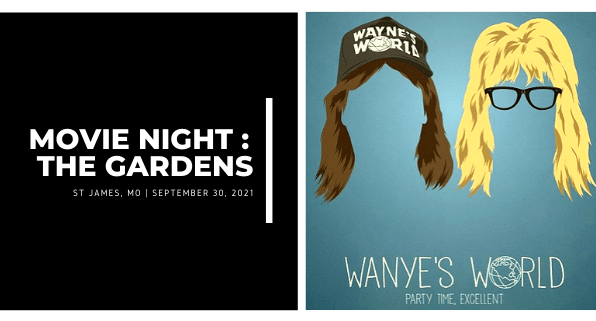 “We’re not worthy… we’re not worthy!”
The last movie of the season is Wayne’s World! Based on the Saturday Night Live sketch of the same name, Wayne’s World is a wacky, irreverent pop-culture comedy about the adventures of two amiably aimless metal-head friends, Wayne (Mike Myers) and Garth (Dana Carvey). Direct from Wayne’s basement, “Wayne’s World” is the biggest show on local public access television. But now a sleazy network executive (Rob Lowe) wants to produce a big-budget version. With the help of Wayne’s girlfriend, the lovely rock singer Cassandra (Tia Carrere), they must battle to save the show.
The film will play on the outdoor big screen, starting at dusk in The Gardens. We will be open late this evening with the kitchen remaining open until 9:30 p.m.
This is a free-to-attend event and kids are welcome. Please, no outside food or drink is allowed, but you may purchase wine (keep the receipt) from the St. James Winery Tasting Room and bring it in The Gardens

Joe Fry Live at the Taproom
Scroll to top