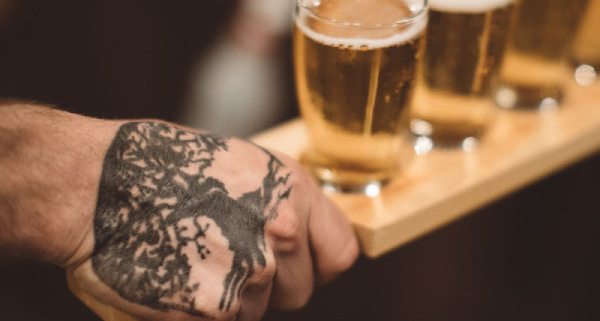 Ok. It’s confession time. The rumors are true. I have a life-long love affair with playlists. There, I said it. I feel better.

First, I’m a music nerd. N-E-R-D. I come from a musical family. My mother plays piano and sings. Her parents sang and played guitar and piano at church and even had their own country gospel band way, back in the day. So music is literally in my blood. In my early teen years, something drew me to the drum kit. And I’ve been playing the drums ever since. Along with that, I played trombone in concert, jazz and marching bands throughout my school career.

As a teenager growing up in the early 1990s, my first love affair with music was this new thing called “alternative rock.” Oh, alternative rock. How do I love thee? Let me know count the ways …

I bore witness to the rise of Seattle grunge like Pearl Jam, Soundgarden, Alice In Chains, Nirvana and more. I also lived through the second British invasion in the 90s with bands like Oasis, Pulp, Blur and others. I wholeheartedly embraced all of these new, raw, heavy sounds that took influences from metal, blues and classic rock, and fused them into something completely new. These people weren’t afraid to be very upfront about their feelings. Drop “D” guitar tuning was prevalent, as well as other alternative tunings.

Lyrically, many of these acts wore their heart on their sleeves. It’s no secret that rock music is written most of the time from an adolescent point of view and embraced by the intended audience. Rock has always been the cool, rebellious outlet for necessary for dealing with the complexity of emerging emotions in young adults and I was no exception. The Beach Boys’ “In My Room” pretty much says it all. As a teenager, your room is your refuge. A place where your identity is forged by the music you listen to, the notes you write to girls you like, and a place you can talk to your friends out of earshot of your parents. The place where you can just be yourself.

And I paid my dues in that room: discovering anything new I could get my hands on, watching 120 Minutes on MTV every Sunday night, gladly receiving dubbed cassette tapes from friends with the new stuff they were listening to. Carefully cataloging and organizing my CD collection (CD stands for “Compact Disc” in case anyone has forgotten). Fortunately, I had lots of good friends who were kind enough to keep feeding me new stuff I might like – often in the form of a mixtape. I wanted to return the favor so I voraciously sought out new music to introduce to them. I began to understand fully the impact music has on people, the connections that are made, and the little communities that are built from its foundation. Music is something bigger than all of us.

Somewhere along the way, the arduous process of copying and dubbing new music onto cassettes became about more than just a hodgepodge of songs strewn about on some analog inside a plastic case. I realized that a playlist can tell a story, capture a mood or a season, and in some cases serve as a time capsule, taking you back to the exact time in your life certain songs broke through the ether and imbued some kind of universal truth on you that you carry for the rest of your life.

We’ve all had songs that strike us a certain way at the right time under the right circumstances. They can make you stop what you’re doing and listen again and again – maybe on repeat for hours. And while that can be quite cathartic or meditative, eventually the hypnotic state does eventually wear off. You need more variety. You need other voices. So I wondered, “What if you could extend that feeling that rings completely true with you in the moment across 50-70 minutes with other voices and other instruments or arrangements and keep that feeling intact so you can revisit it again if needed or give it to a friend as a kind of letter of affection or solidarity without saying a word?”

The playlists began to take a little longer to put together. I found myself putting more and more thought into it as time went on. “How does the fade out from song #1 affect the intro to song #2?” I found myself creating little unwritten rules for myself about how I wanted the playlists to work. There should be an arc to the overall playlist. I think of playlist construction much like album construction. It’s important where the upbeat rockers go in relation to the ballad or down tempo songs. It matters. First and last tracks matter a lot. First tracks typically set the tone for the rest of the playlist. The last track is like a final summary statement. “What do I want to leave my listener with?”

Yes, I have a problem. The first step is admitting it.

Throughout my life I’ve created playlists. I’m pretty sure I’ll never stop. For me, music (and I really do appreciate all kinds) is the soundtrack to living. If I’m feeling angry, I’m going to listen to metal, industrial or punkrock. It’s like therapy. If I’m happy, I usually want the biggest, most joyous kind of stuff I can get my hands on. The beauty of a playlist is that you can capture any feeling and live inside it for a while. It’s a bit of escapism I suppose, but everybody needs a bit of that from time to time, right?

So … playlists for beer? Sounds a little strange maybe. I don’t know, maybe not. What I do know is that a lot of time and love and care go into every beer we make. Wrapped up in the creation process are people laughing, talking, and drinking beer – debating styles, ABVs, SRM, IBUs, etc. In the end, the collaborative process produces a beverage that we hope brings a smile to someone’s face.

Know this: beer is a living thing and a playlist is the personification of a beer. It takes on a personality and life of its own. The playlist, along with our label artwork, our stories and our people, make our beer a multi-dimensional being – not just a monolithic box on the shelf of a grocery store. For maximum effect, open a bottle, pour a glass and press play. Listen from start to finish.

Beer, laughter, love, music. What else is there?