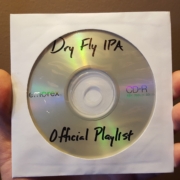 By request, from the fishermen amongst us….

Listen to the playlist on Spotify (you must create a free account if you don’t already have one): http://spoti.fi/2FeFCbi 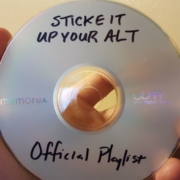 Listen to the playlist on Spotify (you must create a free account if you don’t already have one): https://open.spotify.com/user/reporter26/playlist/34SylSGfujMzqOFVDOibUx 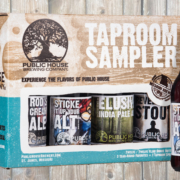 Sticke It Up Your Alt is here and with it comes a feeling of rebelliousness. The label artwork for this beer features a piece of the Berlin Wall that now resides in Fort Leonard Wood, MO. This beer is a shout-out to our valued service members, the country of origin for this beer style and the defiant attitude that sparked the tearing down of an instrument of division – with a stick it to the man attitude.

This style of beer originated in Düsseldorf, Germany. The Sticke Altbier began with brewers being a little heavy handed with the malt bill and adding extra hops for balance. The name Sticke comes from the locals gossiping about the brewers little “secret” of a slightly stronger beer on tap. It has a light, hoppy nose, a complex malt character and a dry finish. Our co-founders describe Sticke It Up Your Alt as a rich, medium-full bodied German-style lager that is smooth, crisp and formidable.

We are proud to release Sticke It Up Your Alt in the first Taproom Sampler of 2018. Look for this sampler pack in a Missouri store near you or at either of our brewery locations.
Included in this release are 12 beers with three bottles of each of the following: our exclusive taproom special, Sticke It Up Your Alt along with three year-round favorites, Rod’s Cream Ale, Elusive IPA and Revelation Stout.

Experience the official playlist of Sticke It Up Your Alt. 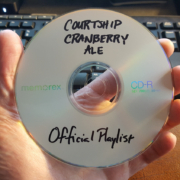 Listen to the playlist on Spotify (you must create a free account if you don’t already have one): https://open.spotify.com/user/reporter26/playlist/4o3xZpAppSaeGXEnrtLcne 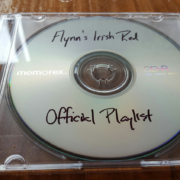 Well, there’s a little bit of everything here. Although, from the outset it was important to me to remain as true to the Irish theme as possible. Some of these songs are traditional Irish tunes, while others are simply great songs by contemporary and classic bands of Irish origin that are not necessarily centered on the celebration of St. Patrick’s Day. The playlist is bookended by two very Irish performances: the first by Seamus Ennis (1919-1982) – one of the most legendary uilleann pipe players recognized for having preserved almost 2,000 Irish songs and dance tunes as part of the work he did with the Irish Folklore Commission. The last track is the part-spoken/part-sung poem “I Am of Ireland” by William Butler Yeats, which I think we can all agree needs no explanation.

In “The Fairies Hornpipe,” Seamus Ennis introduces the tune with a tale of supernatural origins. It seems that a young man lost his way when returning home from a dance, and it being late and himself tired from dancing, he bedded down in the middle of a field for a nap to await daylight. He woke, however, when it was still dark to the sound of music and the sight of fairies dancing. He committed the tune to memory, but when he eventually found his way home and told the village of his adventure, he was not believed, and he was thought to have more likely passed out in a drunken stupor. The young man produced an instrument and proceeded to play the tune the fairy piper had been playing, and since even the oldest member of the community could not remember having heard it before, the young man was perforce believed. The tune was thereafter known as “The Fairies Hornpipe.”

I must say that upon hearing this track for the first time, I was transfixed by Seamus’s recitation of the tale – despite my inability to understand the dialect – proving once again that music transcends language and speaks directly to the heart.

This epic opener segues into The Pogues’ upbeat tune “The Sunny Side of the Street.” If anyone could follow Seamus Ennis, it’s this Celtic punk band formed in 1982 and fronted by Shane MacGowan. The band was founded in Kings Cross, London,[1] as Pogue Mahone — the anglicisation of the Irish póg mo thóin, meaning “kiss my arse.” So … you gotta love that, right?

It would be sacrilege to make this playlist without including U2. If you’ve never seen them live, you should. Being in the crowd is like being in the biggest, coolest church ever. Every voice in unison, singing every epic line to every epic song. Modern haters tend to know nothing of their earlier material, and for that reason, I chose the driving rocker “I Will Follow.” So haters, this one’s for you. It may not make you love U2, but I tried.

“I’m Shipping Up to Boston” is quite a guilty pleasure. Dropkick Murphys aren’t from Ireland. Quincy, Massachusetts is home for them, but it’s clear where their hearts beat. You can’t help but want to dance and jump around like a crazy person when this tune kicks into high gear. Face it. No one is immune. And for fans of the film “The Departed” you have even more reasons to love this one. So go ahead, finish that pint in your hand and stop worrying what everyone will think when you start jump-dancing terribly.

I fell in love with “I Don’t Like Mondays” by the Boomtown Rats the moment I heard it. This Irish new wave band that had a series of Irish and UK hits between 1977 and 1985 and was led by vocalist Bob Geldof, also known for starring in Pink Floyd’s 1982 film “Pink Floyd – The Wall” as “Pink.” This song has nothing to do with the St. Pat’s season, but oh man….Just. Listen. To. It. If this doesn’t put a smile on your face you need to check your pulse.

Ash. “Girl From Mars.” Anyone remember the 90s? I do. And I like this song. And they’re from Ireland. Done.

Influential Irish folk group, The Clancy Brothers, which initially developed as a part of the American folk music revival influenced the young Bob Dylan and other emerging artists, including Christy Moore and Paul Brady. The tune “Beer, Beer, Beer,” with Tommy Makem is pure mischievous fun. Maybe it’s a little on-the-nose, but how could the playlist not have a song like this? Enjoy.

Oh yeah. And I got “When You Sleep” by My Bloody Valentine on here for that sweet, sweet, indie, shoegazer, street cred. Also, it’s actually a really good song. Listen to it more than once.

The Cranberries. The 90s strike again. But seriously, Delores O’Riordan’s lilting mezzo-soprano voice, yodeling and strong Limerick accent are unforgettable and unrepeatable. In “Dreams” she turns in a delicate performance that cements this song in rock history.

The Undertones remain the most successful band to have emerged from Derry, Northern Ireland. The pure teen angst of “I Gotta Getta” needs no explanation.

“When We Were Young,” by Whipping Boy is straight up 90s alternative. But lyrically, there’s no mistaking that these lads are straight outta Dublin.

The Waterboys Mike Scott said that “Fisherman’s Blues” was partly inspired by W.H. Auden’s poem “The Night Mail,” which he remembered reading at school. He said it was about how the mail train would roll through the night and the poem itself replicated the feeling, the rhythm, the speed of the train. So when you read the poem either out loud or in your mind, it conjured the movement of the train and when he wrote the second verse of ‘Fisherman’s Blues,’ he was trying to get that effect. It’s got an easy rock-a-bye swing to it that’s quite infectious and it feels just right on the playlist.

Stiff Little Fingers are a punk rock band from Belfast, Northern Ireland, formed in 1977. “Gotta Get Away” just has a great feel and is a good representation of a lot of the punk attitude that permeated music there and then.

Flogging Molly is an Irish-American seven-piece Celtic punk band from Los Angeles, California and led by Dublin-born vocalist Dave King. “Rebels of the Sacred Heart” has a larger-than-life feel and King’s Irish growl is the perfect complement. As I began sunsetting the playlist, this felt like a great segue to Bob Reeder’s tender performance of “Sons of Molly.”

For those that don’t know, Bob Reeder is a gregarious fellow who resides in the greater Kansas City area and has been playing Irish tunes for over 30 years. If you’ve never seen Bob perform live I highly recommend it. You won’t soon forget it.

“Sons of Molly” gently subsides and gives way to V.C. Clinton-Baddeley & Marjorie Westbury in their spoken/sung recitation of Yeats “I Am of Ireland.”

I hope anyone who reads this seeks out these songs if they don’t already have them and of course … enjoys a pint or five of Flynn’s Irish Red Ale!

As always, be safe, be responsible and be kind to each other. A friend, a pint, a session, is what it’s all about. Slainte!

Hear the playlist on Spotify (must have an account to listen – you can sign up for free): https://open.spotify.com/user/triciaburkhardt/playlist/3V6doOQZK119XsVLMvISGN

Mentions of any artists, living or dead, should not be construed as an endorsement by those artists of Public House Brewing Company products. We’re simply big fans. That’s all.